This unexpected new episode of the “HFT in the Banana land” series may also be coined “HFT in my backyard | S02E01”, or “S22E45”, or in more simple terms “Going to the Signal to get signals faster”. This blog has been silent for a while as I really didn’t have the time to write here, but that doesn’t mean there is nothing to say (in fact, there is a lot to write about but as I’ll explain later, I decided to withdraw the season 2 of “HFT in my backyard” as I’ll write a whole book about all my investigation on the wireless networks the HFTs love). But I couldn’t resist to add this new episode of “HFT in the Banana land”, even if it’s not about the banana – but a consequence of what happened in Richborough where the two giant masts Vigilant and New Line Networks wanted to erect there were harshly refused by the Dover District Council (read the previous episode).

Here is the story as I understand it. Let’s start with a general view of the current situation, from Frankufrt to Slough. I take the Vigilant route as the Canadian firm was the first to bid in Richborough to get this beautiful nearly perfect straight line between Frankfurt (FR2 data center) and Slough (LD4 data center):

Here are the details of the Vigilant towers…

… one by one, starting from Frankfurt :

From Frankfurt the path goes to Weibern where there is a high tower perfectly located close to the straigh line between FR2 and LD4 (the good old German industry). Then from Weibern the signal goes to Simmerath, at the Belgium-Germany border:

It seems most of the microwave players (Vigilant, Optiver, McKay Brothers, etc.) put dishes in Simmerath. The wikpiedia page about this tower is amusing. It says: “Am 6. September 2013 wurde der Sendeturm aufgestockt. Der genaue Grund für die Aufstockung sowie die aktuelle Gesamthöhe sind nicht bekannt. Bis dahin betrug die Gesamthöhe 66 Meter.” In short: “in September 2013 the tower was expanded”, as shown on this photo I found in a German newspaper:

The wiki page states that “the exact reasons why the tower was expanded are not known”… but the explanation is quite simple: there was not enough space anymore for all the HFT players, so the tower was adapted to receive all the dishes, as shown on this (wiki) picture took just after the tower was rebuilt: 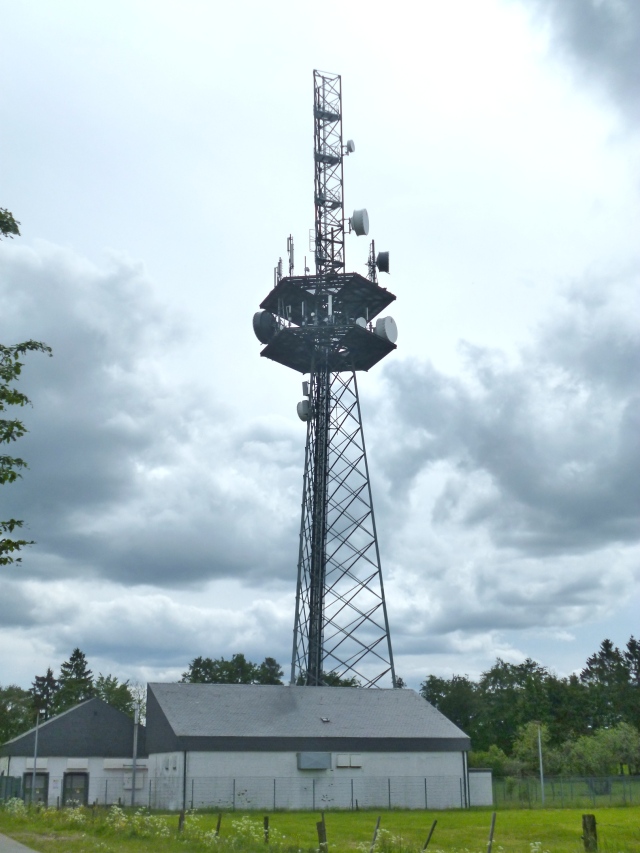 From Simmerath the Vigilant signal goes to Welkenraedt and then to Tienen:

You can watch the Vigilant dishes in Welkenraedt on the antennasite; in Tienen they are probably on this strange water tower:

From Tienen the path goes to Merchtem and Egem:

Since the Merchtem tower is located 6 kilometers from my new home in Brussels, I paid a visit to this tower months ago, and it looks like that:

Here is now the Egem tower, which is the tallest structure in Belgium (if you want to know more about Egem, read again this old post about my trip there, where I wanted to have a coffee in a place which appeared to be a sadomasochist brothel (?!).

From Egem, the ideal Vigilant route would go to a building in Oostduinkerke (ideally located very close to the straight line between FR2 and LD4), and then to Richborough (cf. the previous episodes of “HFT in the Banana land”)…

… but the Vigilant mast in Richborough was refused. The Egem-Oostduinkerke-Richborough path is a dead end (at least for now ;). That means the Vigilant route, from Egem, has to go South to Dunkerque (or to Coudekerque-Branche, where Vigilant has dishes on a tower) before going North to UK (in Tilmanstone, where Vigilant will expand a small tower to cross the Channel – from the grain silo where McKay has dishes in the port of Dunkerque?):

This is the kind of path HFTs don’t like: not a straight line but a triangle, meaning they have to make a detour and that’s not good for latency. The most important detail here is the high-frequency traders can’t cross the Channel with a path close to the straight line (Oostduinkerke-Richborough); they have to do it from (around) Dunkerque (or Houtem, where Jump purchased a now-very-famous giant tower for $5M). The consequence is: if you want to build the best/fastest network from FR2 to LD4, you need to have a straight path from Frankfurt to (around) Dunkerque (the big path in red in the picture below).

This is what the competitors name the “South route”, opposed to the “North route”. The North route was annihilated by the decision of the Dover District Council about Richborough, so the operators need to improve the “South route”. Here is the real beginning of this episode.If you want to build the best path from Frankfurt to Dunkerque (the “South route”), forget Simmerath (which is too far north). You have to find another tower further to the south, inside the square in red in the picture above:

And you know what? There is such a tower there: the famous Signal de Botrange. The Signal looks like that: 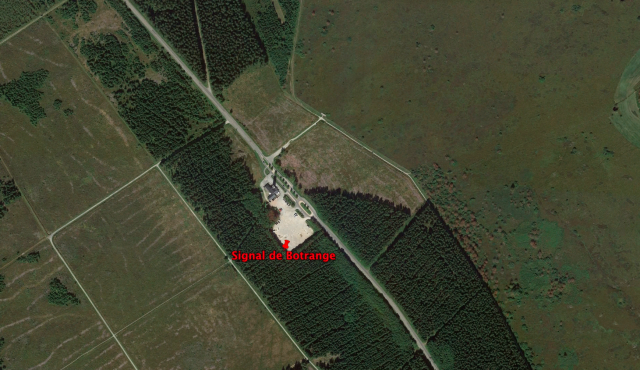 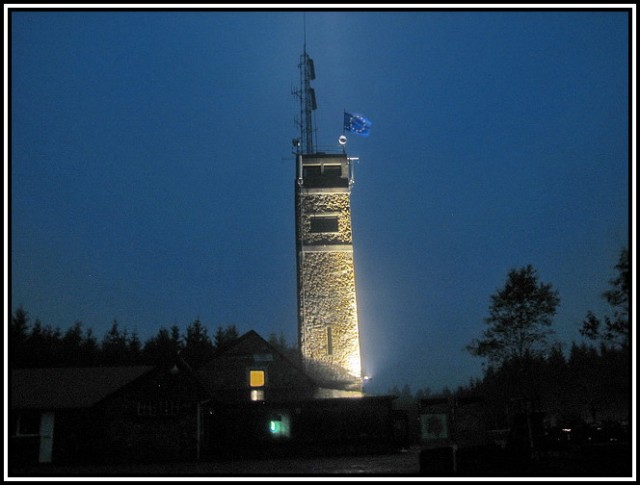 In Belgium the Signal de Botrange is very famous for many reasons. First, it’s the highest point of the country: 694 meters above the sea level. Secondly, it’s one of the few ski resorts of Belgium. Thirdly (in my opinion), this is one of the most beautiful places of Belgium. I went there a couple of times to explore the “High Fens”, or “Hautes Fagnes” in French, a very nice nature reserve.

There is an amazing story about Botrange: for a long time there was nothing in the highest point of Belgium (actually it’s the highest point of both Belgium, Luxembourg and Netherlands), but in 1923 the local governor Herman Baltia decided to erect a 6 meter stairs :“Apparently, clocking the country’s highest point in at just shy of 700 meters was simply too tantalizing, and so in 1923, a 6-meter (18-foot) stone staircase was constructed atop the peak. From its height, on the top step of the seemingly nonsensical staircase, visitors can survey the land from exactly 700 meters above sea level.” The ridiculous thing looks like that: 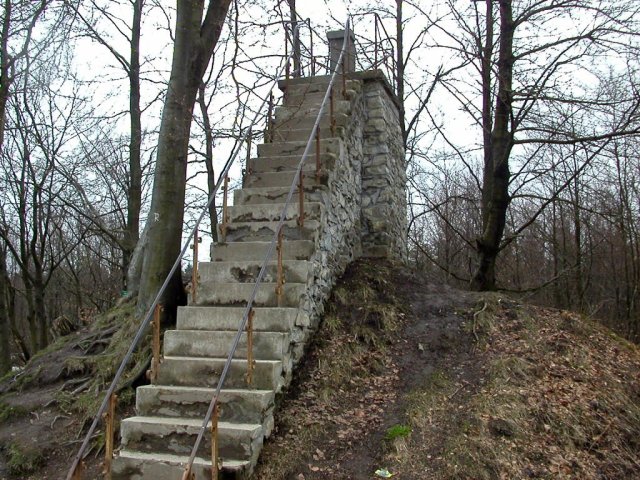 Eleven years later, in 1934, an observation tower was built, reaching a height of 718 meters above sea level: the Signal de Botrange. Now here is the story of the HFTs around Botrange. I don’t remember who talked to me, three years ago, about a new project of mast in Botrange reated to HFT but last December I have been asked by a firm not to share (here on this blog) the public documents I would find about this project, as the firm didn’t know how many competitors would be aware of what was going on. I said “ok” and instantaneously started to find intel about a story I could not tell about until yesterday. I was surprised when I found this video interview of the local mayor made by a local TV:

Note that the interview as made in November 2013, and the title of the video is “A new 50-meter tower to suport financial operations between London and Frankfurt”, and I think this is the very first press coverage in Belgium on the microwave networks (too bad I missed it before). In short the mayor says that the local community have been contacted by a Canadian firm (that smells Vigilant), by an American firm (that smells Jump, now New Line Networks), by a consortium including French, Dutch and German firms (the French one should be McKay Brothers, the Dutch firm is strange – that could be Optiver or Flow Traders, but both the Dutch firms don’t work with McKay…). The mayor explains the different competitors wanted to erect a towers in Botrange because the fibre is too slow, so HFTs use microwave, etc. At least the local people know exactly why some firms need new towers… The mayor also says that a request for proposals would be made as the total budget is €M2-3. It’s not clear if the mayor states that all this money would be distributed to the local community, but he seems to be very happy with the project as the new 50-meter tower would be higher than anything in Botrange. A new record!

So, back in 2012, some HFT firms were already lurking around the Signal de Botrange. It seems it took quite a long time before the request for proposals was released… on March 3, 2017. The public documents are here. Among the usual boring administrative stuff (but where we learn that the minimum bid amount is €50,000 a year), there is a map of the Signal de Botrange with the location of the future tower: 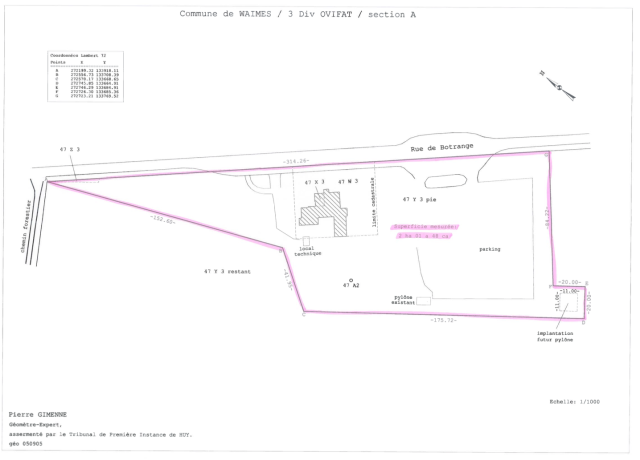 I did a quick simulation with Google Street (of course, the winner will have to put all the different telco dishes which are around the Signal on the new tower). 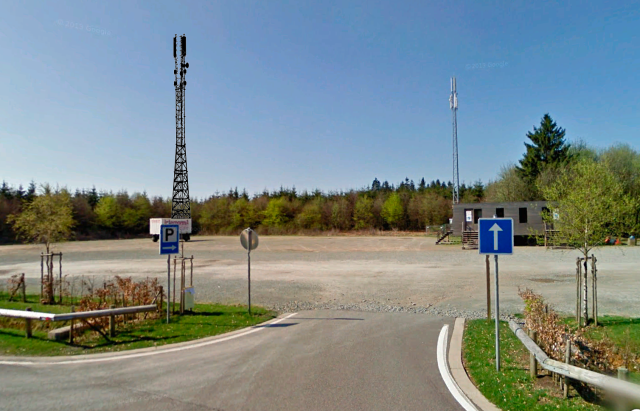 The competitors had until last Friday (May 19th) to submitt an offer, and yesterday the Collège communal (the municipal college) started to open the enveloppes. I called the local office to know more about what’s going with the offers, but the clerk told me that they can’t communicate now as the Conseil communal (an other administrative college) will have to discuss the offers too, etc. I was not even able to know how many offers were sent to Botrange. But the local authorities should decide soon about the next dead-lines. Who will be the winner? One can assume the Canadian firm, the American firm and the French firm submitted offers but perhaps there are other HFT lurking around Botrange too… We will see. Anyway, that’s amazing the HFTs want to be on the Signal to get signals faster. Thanks to HFT, soon the highest point of Belgium will be higher than ever, and that’s pretty cool for such a small country!

In the meantime, on the other side of the network, in Houtem, @Nuklearexperte had fun by peeing on Jump’s ground. That is what happens when a man drinks too much Belgian beers…