I’m finishing these days the last part (V) of “HFT in my backyard” (this historical and prospective post should be online early next week). I visited again the Ofcom website this morning to check data about the channel and I had a pleasant surprise. Two, in fact: 1) the UK regulator now gives more data than before about the frequency licences (the licence start date, the locations and a lot of technical details such as the antenna azimuth in degrees), it’s very helpful when you are doing a detective work about the microwave networks owned or used by some high-frequency traders in Europe – that said, my detective work is now finished, it was really fun but I have more serious matter to deal with; 2) but… since you can access more details about the UK frequency licences, I decided to go back to Dunkirk, England. Dunkirk is a small town with a historical tower where four microwave competitors are (Latent/Getco, MacKay Brothers, Optiver and Custom Connect). The reason is: the town is close to the straight line between Dover/Swingate and Basildon:

In a previous post titled “More on piracy”, I focused on one of these competitors, Custom Connect (CC). By reading the planning application CC submitted to put dishes on the tower, I was amused to learn the firm installed them before the council gave his approval (no big deal). What was more surprising is the fact CC didn’t have any Ofcom licence to use the Dunkirk dishes (that’s why I jokingly called them “pirates”). Back in June 2013, CC had a licence to go from Dover directly to Basildon without going through Dunkirk: 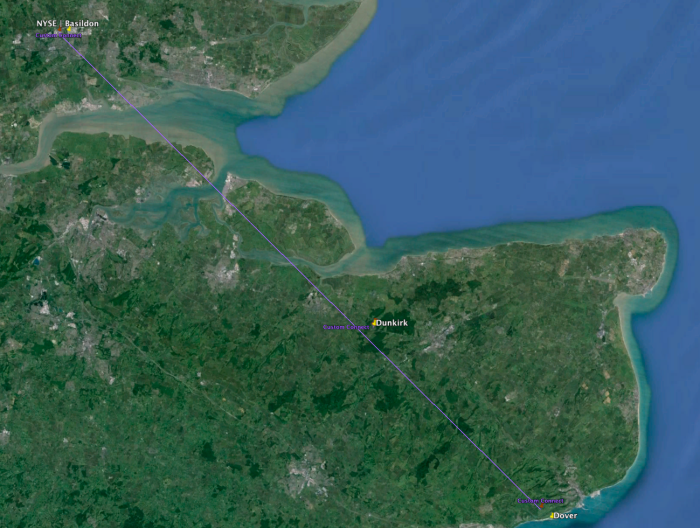 But this path seemed very strange. I don’t think it’s technically possible to have one path to go directly from Dover to Basildon. If it would be possible, why the other competitors need at least one tower between the two points? I know the Ofcom can grant licenses between two points without verifying the line of sight (that means: if you pay, you can get a licence for an impossible path, Ofcom doesn’t care). So, in June 2013 Custom Connect had no licence in Dunkirk, only a “suspicious” licence between Dover and Basildon, and the Dunkirk council granted the installation of the dishes there. But things have changed: ladies and gentlemen, now Custom Connect has a licence in Dunkirk. It was granted a couple of a weeks ago, on November 26, 2014. The licence is for a path between Dover and Dunkirk: 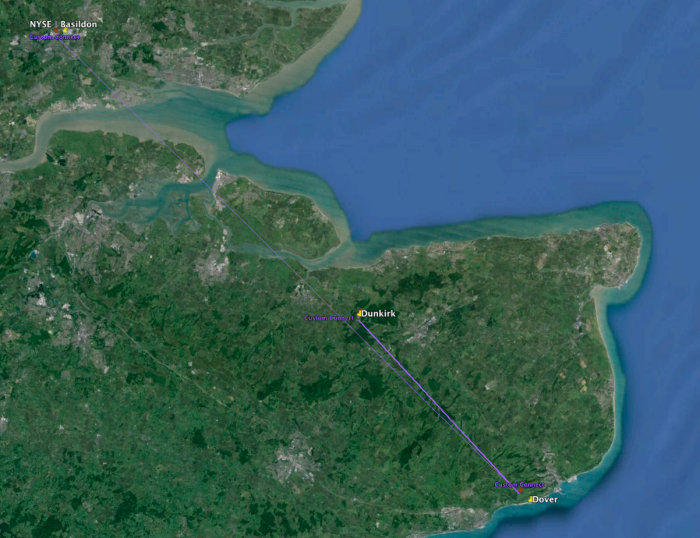 One mystery is now solved… or not, as some questions remain: 1) The Dunkirk council gave a “retrospective consent” in January 2014, that means CC was authorized to install dishes but why it took so long (11 months) to ask for/receive a licence in Dunkirk? 2) The Dunkirk planning application tells us the CC dishes in Dunkirk lead to Dover (that’s consistent with the very recent Ofcom licence) and Basildon…

… but CC has no Ofcom licence for the Dunkirk-Basildon path. Strange. Does it mean CC runs one or two dishes in Dunkirk without licence? 3) There is more: the recent CC Dunkirk-Dover licence tells us the firm asked for a 24 ghz frequency range. That is strange too. If you are a little bit familiar with the microwave frequencies used by the HFT competitors in Europe, you would know the 24ghz band is not the best choice at all. In short, with a 24ghz frequency range it’s very hard to achieve the 27 kilometers path needed betwen Dover and Dunkirk (I may be mistaken but 20 kilometers would be a great success) and I don’t even talk about the rain fade – in England… So the mystery is not fully resolved. Let’s move to Dover.

The Dunkirk-Dover licence was granted on November 26, 2014. One week before, on November 21, 2014, Custom Connect was authorized to remove old dishes and install new ones in Dover. Before this new authorization, data coming from both French and English radio regulators said the Custom Connect route was Dover-Boulogne-Berthen.

The new planning application tells us the dishes leading to Boulogne will be removed and two new dishes will lead directly to Berthen (adios Boulogne):

This is an interesting path, the longest (107 kilometers) to cross the channel – at least among the different HFT routes. But one mystery remains: why CC doesn’t have any Ofcom licence to cross the channel from Dover to Boulogne as they already had dishes leading to Boulogne before moving to Berthen? In Berthen, Custom Connect has an authorization to use the 8ghz frequency range but it’s legally impossible to use the 8ghz in England. So I bet some new French licences will show up quickly. (To be followed…)

PS: by the way, I heard the French regulators will check all the dishes in North of France within the next few months. The police is coming;)