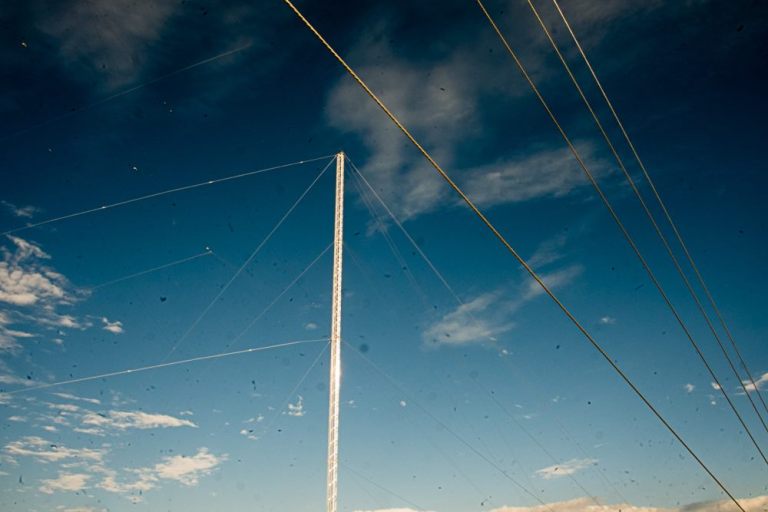 [Here is Bob Van Valzah’s last episode of the “Shortwave trading” series. Again, I’ll add a Part V about Europe when I’m back in my backyard, on Thursday. Meanwhile, I hope you’ll enjoy this last part from Bob – Alexandre]

After my first few public posts about shortwave trading, I gradually realized that I’d inadvertently created a worldwide network of deputy antenna sleuths. This is the final post in the Shortwave Trading series since the terms of my forthcoming employment agreement will prohibit me from future public talk on the technology of trading. I want to leave behind details on some of the research tools and techniques I’ve used. This is how the sausage is made.

I’ll also leave a list of locations that may be worth watching. Some may be near you. Even if I can’t talk about what’s found in the future, maybe you can? The comments below might be a good place to document new findings until there’s a better place offered.

In addition, following sections will set out the criteria I’ve used to assess the confidence that a shortwave trading site has been found, give example FCC searches, list links to web-based research tools I’ve found useful, give some tips on research techniques, and acknowledge the many people behind the scenes who’ve contributed to this work.

Two quick asides: Video from my shortwave trading presentation at the New York STAC Summit is now available. It’s 31 minutes, including the Q&A at the end. Also, I recorded a podcast episode on shortwave trading. Try these if you’d rather watch or listen than read. Thanks to Peter Lankford at STAC for the video and to Scott Schweitzer at Solarflare for the podcast. 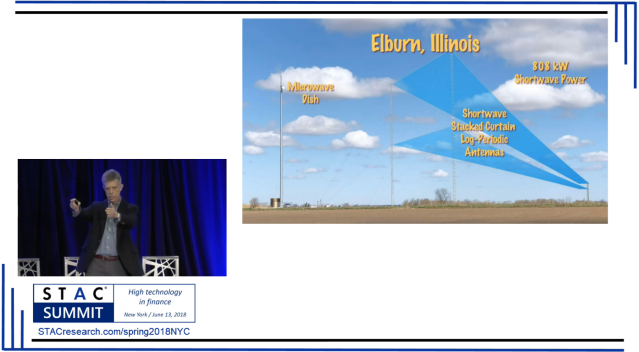 I suppose that the best way to reach certainty that you’ve found a shortwave trading site would be for the owner of the site to publicly admit that it’s theirs, and that they’re using it for shortwave trading. That’s not going to happen, but there are still many scraps of circumstantial evidence that can add up.

The credibility of your conclusions goes up if you can find government records that tie a site back to a trading company. Trading companies generally create shell companies to hold their shortwave trading assets. Look for:

Note that FCC licenses will have contact information. This is often a telecommunications lawyer with an office in Washington DC who prepared the license application, and also created the shell company to hold the license. One lawyer or one law firm may work on behalf of many clients, so consider any correlations circumstantial, but suggestive.

It’s tough to beat government records for adding credibility to your findings. Finding FCC licenses to transmit both shortwave and microwave from the same location is a great goal. There are many ways to search FCC databases, but I’ll give two examples searches for shortwave licenses. Once you have the coordinates where a shortwave license allows transmitting, I’ll show how to do a microwave search around those coordinates.

Cell towers are by far the most common thing you’ll see, then maybe AM, FM, and TV transmitting antennas. But let’s assume you get lucky and spot something odd-looking in a city and want to check your hunch. I’ll use the city of West Chicago as an example.

You want to search for all experimental shortwave licenses in West Chicago, so you go to the Experimental Licensing System Generic Search web site. Fill in the shortwave Frequency Range of 3 to 30 and select MHz from the unlabeled suffix drop-down menu. Fill in Transmitter City with West Chicago.

Do not fill in the Transmitter State field or you’ll trigger a bug in the FCC website and get an error.

I’ve reported the behavior, been thanked, and told that it’s a known problem.

If your search returns any licenses, see the section below on reading FCC experimental license search results.

My searching began with the question: “What experimental licenses allow shortwave transmitters within 100 miles of CME?” Here are the steps to do that query.

We need to have the coordinates for the center of our 100-mile search radius. I’ve heard that CME doesn’t officially reveal the location of their primary data center, but Google is happy to give you the answer directly in the search results so you don’t even have to click to see it.

Google’s convenient answer brings up an important side point: there are several different geographic coordinate systems in use and it is sometimes necessary to convert between them. The query result above shows results in decimal degrees, but the FCC searches require degrees, minutes, and seconds. Instead of converting, it’s sometimes easier to find my target in Google Earth and then read degrees, minutes, and seconds from the display. 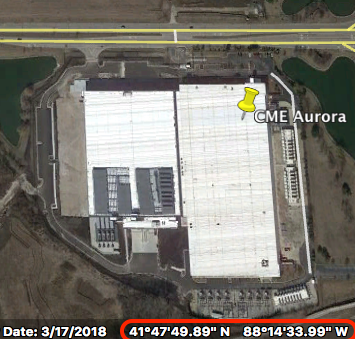 Start with the FCC Site / Frequency Query page and set Service Selection to Specific Services Only and check the box for Experimental Database.

Set Frequency section Begin and End fields to 3 MHz and 30 MHz, respectively, to limit the search to shortwave frequencies.

Hit Submit Query and you should see several rows of output. I’ll just highlight the one for West Chicago. From this, you can get the coordinates needed for a microwave search.

You can also click on the Callsign link to query for all licenses for a station. Interpretation of the results is described in the next section.

The experimental license query results I see for West Chicago look like this:

As in this case, it’s common to see a list of expired and renewed licenses. It’s also common to see licenses updated long before they expire; these are experimental licenses after all. There may be no difference between the Initial and Current links in the left column, but if changes are made over the lifetime of the license, they’ll show up as a change there.

A granted license will be shown on FCC form 442. See the form by following the Current link in the View Form column. It’s sometimes insightful to compare the changes relative to expired licenses to understand trends.

Note that your browser and the FCC’s web site may conspire to open FCC form 442 in a new tab or new window, leaving the search results still to be seen. Clicking on other form 442 links in the search results may just update the tab or window that was displaying earlier form 442 results, overwriting them.

An interesting part of the form is the Manufacturer section listing the transmitting equipment used. This often includes the transmitter, modem, or SDR, power amplifier, and antenna.

The form ends with a Station Location section, with subsections for each site where the licensee may transmit. The GPS coordinates for latitude and longitude should get you very close to the antenna location. But be aware that the street address and city may be approximate. Some of the sites I’ve visited are far enough out that they may not be part of an incorporated city. The address used on mapping apps seem to go by the city handing postal mail delivery for the area, which might be different from how the FCC sees the address.

Applicants sometimes request redaction of the antenna heading (degrees from True North above). But when they do, you just have to visit the site and stand under an imaginary line in the sky pointing in the direction of the shortwave antenna heading. Walk away from the antenna site along this line, pausing every 500 feet or so. Make sure you’re still on the heading line and take a picture of the antenna with your cell phone. Back at home, get the GPS coordinates of the pictures and plot them with GoogleEarth to get the heading line. It only takes a few points to establish a line.

Microwave links use well-established technology so there’s no need to experiment. Such licenses are part of the Universal License System (ULS) online database. If we have the station location coordinates from a shortwave experimental license, we can use those to look up associated microwave licenses nearby. I haven’t found an easy way to do geographic ULS searches, so this is a multi-step process. Start by following the Site Based link.

Microwave licenses of interest will come from the business pool, so select MG from the Site Based section and the Radio Service Code scrolling list.

Click the Coordinates radio button and fill in Latitude, Longitude, and Radius. You can use a small radius if you’re confident in the accuracy of the coordinates you have, otherwise you may have to increase it to get a hit. Click the Search button.

Now click on the Map tab to see the location of the other end of the link: 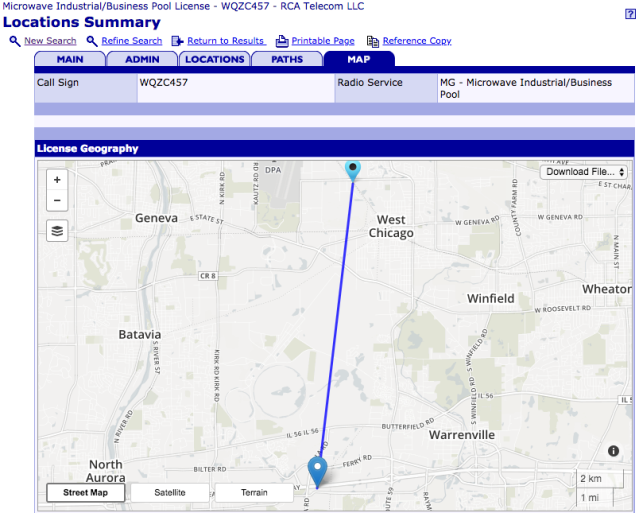 Note that sometimes microwave searches find no license when it sure seems like they should. I know one reason is that sometimes higher frequencies are used instead (“millimeter wave”). The FCC doesn’t require point-to-point licenses at these frequencies. However, the rules as I understand them still require that point-to-point links be registered in a frequency coordination database (see Micronet database in Links below). Check there before giving up.

But even with that, I still see links in the air that I can’t find in a database anywhere, so I think I’m still missing something. I’d love to hear about it in the comments below if any readers know how to do a more thorough search.

If you’re intrigued by shortwave trading, I can think of a few things you may be able to do to help us all learn more. Please add to the comments below if you see anything interesting.

Primary thanks go to Alexandre Laumonier (a.k.a. Sniper In Mahwah) who’s pioneering work on the HFT In My Backyard series of posts inspired me to undertake this work.

My public posts about shortwave trading brought out not only deputy antenna sleuths, but also advisors who can’t talk publicly. Thanks to all the insight they provided on the QT.

Thanks to all who’ve commented on previous posts. Please comment here if you find anything interesting or develop any other research techniques. 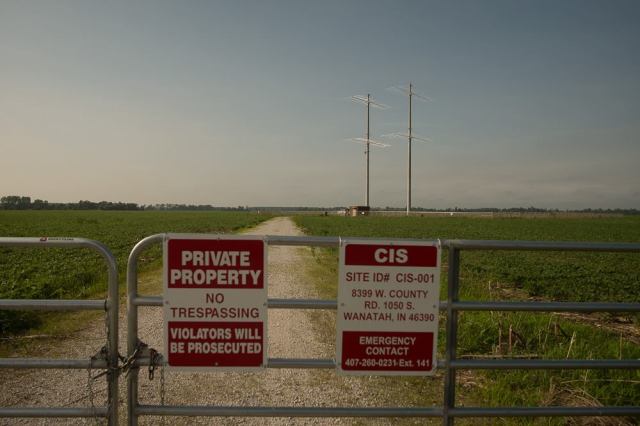 One of the shortwave sites visited by French sound artists working on a project about the “sounds” of high-frequency trading. © Jean-Philippe Renoult & Dinah